My mom finds it offensive to refer to God as IT, correction–she thinks God is probably offended by being called an IT.

I think being “offended” is a state of our fragile human egos–rooted in our insecurities and egoic needs, something which I am sure most people would say GOD is way beyond–even if they see God as a superhuman-like character!

The universe and what lies beyond, is an “IT”.
Time, destiny, the past, the future, all objects and concepts, concrete and intangible, manifested and unmanifested are “IT”s.

Humans are small, puny, fragile, relatively insignificant & unconscious, tightly defined He’s and She’s…while the whole of Humanity is a diverse, multifaceted force and is an “IT”

What is a “HE”? Simply a male human, (or animal)…subject to ego, time, wants, needs, desires, pain, death…a mere male-puppet in the play of life on earth…very limited indeed!! Even a “She” or a “Woman” can contain a “he” or a “man” within herself, and therefore is a somewhat more complex vessel of humanity.

“He” is for many, a very off-putting/alienating/and restrictive term to refer to GOD. It immediately conjures up patriarchal, social, psychological factors deeply rooted in a specific culture which is itself rooted in a particular time frame of human history.

Most believers of GOD would freely admit that GOD is far more complex than the human mind can imagine–yet will have little trouble giving you a list of GOD’s traits, likes and dislikes, demands, expectations, and predicted behaviors. Why is that? It often has to do with believing in the BIBLE or some other holy book, as an exact description of GOD. Relying on someone’s understanding and limited way of describing GOD; rather than meditating themselves and coming to their own understanding of GOD.

The bible was created between the second & fourth century AD, from a multitude of selected spiritual writings, some of which were rejected (and destroyed) by the Roman Catholic Church–along with the people who supported them. In 1945 some old writings were newly discovered. The Gnostic texts were found safely buried in the Nile valley and give us just a glimpse at how divergent the interpretations of Christianity were and how slanted the existing “bible” might be. A main theme of the the Gnostic central belief was that “divinity is not an external force but an inherent internal capacity available to every human being” How’s that for different? (sounds quite yogic) We can easily see why the Catholics didn’t want that kind of understanding to prevail…how would they get and keep control of people and their money?

A little know fact which has completely upended any belief in the current version of the bible is that the ancient Hebrew in which the first 2/3rds of the bible was written, had no real NOUNS–really NO NOUNS…everything was expressed as verbs. Can you imagine, God as a verb?? As a doing, or a being… (and I don’t mean like the noun “human-being”) I mean like the intransitive verb “being still, being good, being everything…

In fact, in ancient Hebrew, there aren’t really any nouns, either. In languages like English, nouns are the masters and verbs are their slaves, with adjectives and associated forms dancing about to serve them. In Hebrew, verbs rule. Big, little, wise, foolish, king, priest, eye, ear–all of these sound like things, but in Hebrew they are forms of verbs. In fact, according to Rabbi Yeshayahu Horowitz (1560?-1630), author of the classic Shnei Luchot HaBrit, everything in Hebrew is really a verb. Everything is an event, a happening, a process –flowing, moving, never static. Just like when you were a small child.

In Hebrew, there is not even a present-tense. There are participles, but the idea of a present tense only arose later. In real Hebrew, nothing ever IS–all IS movement.

Its very difficult to share a notion of GOD with others, but in my extremely humble opinion, Atheists don’t exist. Atheists are usually awareness of their own consciousness, and believe in themselves; therefore they believe in my GOD, and hence un-define (making up my own verb here…) themselves as atheists. If you believe in anything at all, then you believe in God–call IT whatever you like. 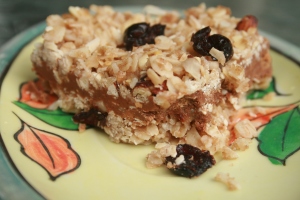 sinfully good, with some goodness added…

This no-bake square is so sinfully tasty, not light on calories…but hey, it doesn’t hurt any living beings (if you buy fair-trade) and I added some goodness so you dont have to feel incredibly bad about it….just cut it up into little portions and only eat 10!

Press half this mixture into the bottom of square cake pan

In another saucepan,
Melt 1 cup DARK CHOCOLATE CHIPS (or milk chocolate if you prefer)
add 1/2 cup of NATURAL PEANUTBUTTER or ALMONDBUTTER (might be nice with tahina too!)

if it doesn’t seem smooth enough to pour on the base, add a little touch of coconut oil…

Refrigerate for as long as you can stand it….at least an hour I think. 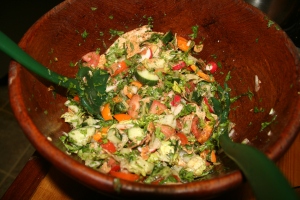 This salad requires several ingredients including “SUMAC”–which is a spice you might find at a middle-eastern store. The quantities are not essential, however the taste is really enhanced with lots of good-sweet tomatoes & fair amount of parsley & mint.

If you have left over, don’t toss it, it tastes great the next day. Don’t let the marinated croutons turn you off…it’s still so tasty!

This salad is delicious, with added almonds and cocount it is high in protein & vitamines, low in fat, and so beautiful it looks like dessert. I have see it turn non-tuna eaters into tuna eaters, non-mango eaters into mango-eaters.
Its a real go to recipe…1 can of tuna & 1 ripe mango easily makes 2 generous servings…

Dice A ripe MANGO (cut off the stem, stand it up and peel off skin with knife, find the direction the pit is oriented run the knife down and along side of it filleting the mango off the pit, cut the excess from the pit) dice into smallish pieces.

Drain a can of WATER-PACKED TUNA

BEAUTIFUL! Just wait till you taste it…. 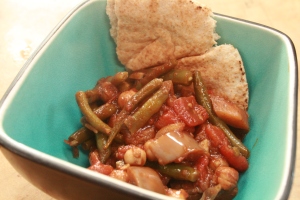 This easy recipe is a healthy vegan option, it is not very precise–you can do more or less of everything…it is a take on a traditional Lebanese dish and is usually eaten HOT or COLD pinched in pita bread, but is nice on its own or on rice…the secret for the best taste is in copious amounts of alspice and letting it sit for a while, it tastes even better a day later!

In a wok or deep sauce pan fry 1C chopped SPANISH ONION in 1/4c of OLIVE OIL add plenty (6-8cloves) of CHOPPED GARLIC and continue simmering, when onions are soft and golden, add a couple of cups of CUBED EGGPLANT, trim and chop about 2 cups FRESH LONG GREEN BEANS add when eeggplant begins to soften; add 1 lg can or several DICED TOMATOES, and half can of TOMATO PASTE, add plenty of SALT & PEPPER & about 2-3 tbsp of ALSPICE, cover and simmer until beans are tender….adjust seasoning & serve. 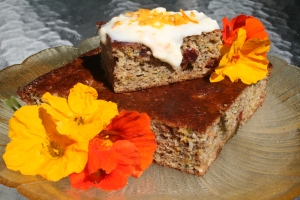 August is coming to an end and zucchini is abundant, hence the need arises to invent some new recipes to use up these lovely long green things…

Using lots of fresh-from-the-garden goodies I made the most delicious LASAGNA I have ever had– twice!

But, First I went sweet, and found most zucchini breads/cakes/loaf recipes used only a little over 1 cup of zucchini—that’s not enough! I wanted to use MORE! and I had alot of other stuff to use up in the fridge too, like sour cream, lemons and blackish bananas. So, I got busy and TA DA! introducing…..a moist, delicious, sweet, & actually quite HEALTHY cake….full of fruit & veggies, whole grains and some protein

4 large eggs (protein baby!)
1/2c sour cream (next time I will use yogurt–less fat, more protein)
2c shredded zucchini (one good medium sized)
2 mashed ripe bananas (medium size)
2 tsp vanilla
1/4c grapeseed oil
zest of one lemon (or orange, or both)
juice of one lemon (or one orange, about 4 tbsp)

mix contents of both bowls together & bake till golden & firm in center
350 degrees for about 35 minutes or more…depends on your cake pan–could make muffins or loaf, but definitely watch your time…

Follow this order to make this beautiful meal in 20 minutes or less(not including the rice):

Make a batch of rice or noodles

simmer minced GARLIC & GINGER in SESAME OIL & CHILI OIL in small pot till aromatic
(I often use AKI’s Jar Ginger & Garlic–but don’t recommend any other jar garlic)then add 1-2 cups of WATER (depending on how much you want to make…)
add 1-2 VEG BROTH CUBES (you can also add a little sachet of dashi…if you have it)
some SUGAR
TAMARI or SOYA SAUCE
CHILI OIL and/or CHILI FLAKE to add spiciness
SESAME SEEDS
powdered CORN or POTATO STARCH (shake a few tablespoons in a little jar of water & then add)
stir occassionally while simmering until thickens, adjust seasoning

prepare garnish of either

:
Dry& Cut FIRM TOFU (sometimes I use previously frozed & squeezed tofu, this has a great texture)

CORN or POTATO STARCH (about 1/2 cup, for one package of tofu)
SALT & PEPPER (to taste)
CHILI FLAKE (if you like spiciness)
NATURAL, BLACK & TOASTED SESAME SEEDS (few tablespoons or more if you like)
dredge tofu nuggets and fry on med-high in GRAPESEED OR PEANUT OIL
Keep tofu nuggets warm in a toaster over or re-heat in frying pan just befor serving
(these tofu nuggets can be cut like fingers and served as a side dish with dip…)

Fry Mushrooms (set aside) then Fry Eggplants, when done re-add mushrooms and other veg and continue frying until all vegetables are tender.

Serve Vegetables on bed of rice or noodles, top with sauce and hot tofu nuggets & garnish

becoming Lotutopia
Create a free website or blog at WordPress.com.